skip to main | skip to sidebar

Wonder what I, The Great Goat of your blackest nightmares I'm about to do for this year's Samhain Festival ?

Err... Well... Nothing more than the other days, you silly! Don't you think there are already enough ordeal creeping your feeble world ?

Too much occupied resting and reading these days...
Books about management, finally understood delegation is the key, and you are evidently fully empowered, feeble humans, killing your siblings, and even posting gory videos and pictures of the mess, as you did with your Gaddafi. Next El Assad ?

What a wonder to just look and only inspire. While copulating with My Nyarly, doggy style, so We can Both watch the screens and laugh and scream in Cosmic pleasure!

And some leisure reading of course
Funny how "The Face in the Hill" reminds Me of something... But what ? You'll know it too soon enough for your sanity, you, feeble human wreck!


Once for all (or not!), here is a book review. Or more precisely a piece of: The New Death and others. 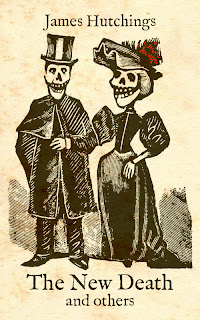 You can get this here or here.
The Author, James Hutchings, seems rather gifted with Words.

Beware, this is Old Stuff as We like it, so you, feeble humans, may not appreciate, or understand. Silly you are!

Old stuff like the farthest memories of some Creators, when they didn't even envision the slightest tentacles...
Though wrapped in modern stenza.

And some... What do you call this ? Humor ? We don't fully understand how you can lough, so miserable you are, feeble underthings.
For what you call "amusement", let's quote some parts of this Everlasting Fire:
"...featuring inspirational quotes from such paragons of wickedness as Jack the Ripper, Tom Cruise, and people who put comments on YouTube."
"By the cloven hooves of Oprah..."
"Sometimes they would stay inside and watch TV; a comedy like Fiends or the game show Who Wants to Boil A Millionaire?"
"Often they would go to a McDonald's (the only restaurant in Hell)."
"...looking up at the moonlight streaming through the hole in Ozzy Osbourne's back yard."
"They gave each other their hearts, as well as several others."

I guess H.P. Lovecraft would have praised these pikes of humor, or despised them.
Or maybe the Author meant this to be a romance ?

Though I utterly crushed My favorite priest from his inside, for trying to push this on line without My Will, and calling Me names, I must admit this mortal stuff gave me a grin. So I allowed this post to be.

Feeble humans, you should really read this to ease a bit the sufferance We prepare for you...


Your back-from-the-dead CEO will remind all his previous life credentials and business & tech visions.

A Recipe for Apple

As you may know, the problem for the Apple Company will be to replace Steve Jobs. Why not simply call him back from the dead ?

Some of you may have read the recipes I published some time ago. Here's the one for this case.

First: ensure that he will be buried intact, and not cremated.

1 - Get his corpse. Could be better after the funeral. Some specialists are available to do that nightly and secretly for a moderate price. Another option could be to replace the corpse before the funeral, but past events shew it's not the best solution, except if you prevent the family to look at the corpse during the ceremony.

2 - Clean up the corpse. There must remain no other matter than the person you want to get back: beware of parasits that could be already shewing the flesh. Remove also all protheses and foreign stuff not part of the original biology of the dead.

3 - Place the corpse in a large enough recipient with pure water to boil it, for example a big cauldron; this recipient must be trated so the boiled content won't stick to it. Bones can be broken to fit in, the corpse integrity has no importance as long as all its element are in the recipient.

4 - Boil it during several hours, adding some dissolvant (but not acid), gum and honey (as done for Egyptian mummies) will help. Ensure there remains enough water all along the process.

5 - When the corpse is liquid and bones supple, let the fire go down.

6 - Refill the recipient with water. And revive the fire.

7 - Let boil at full heat until no liquid remains, and more important, until the bones and teeth are reduced. Refill with water and fuel the fire until it's done.

8 - At the end, you must obtain a pure white crystalish matter remaining in the recipient.

9 - Move this matter to a crystal mortar and reduce it in powder. Be sure you don't lose any part in the process.

11 - Optional: if you don't have full use of the subject, you can send him back to his Essential Salts state:
OGTHROD AI'F
GEB'L-EE'H
YOG-SOTHOTH
'NGAH'NG AI'Y
ZHRO
This can be done as many time as you need.

Before calling back a dead, some precautions must be taken. Even if the subject was not a wizard (be especially careful with those!), some mishap can come, the most frequent one being the recalled too traumatised to keep his sanity.
So be sure to have some sturdy fellows ready to master the subject and bind him if necessary, or havock may happen.
In case you have to kill him before use, you can restart the process of getting his Essential Salts, provided he remains in the needed conditions as before his first passing.

One last thing: when brought back to life with this process, the person may live indefinitely and can be disposed of only by violent means or be killed by accident.
Thus, with reasonable precautions, Apple would never have to worry again about replacing its leader.

The legal situation may be complicated, but this company doesn't lack lawyers to solve that. I advice discretion, though. The best way to manage this kind of situation being keeping the resurrected subject behind the scene, and placing a puppet man on the mediatic front. Tim Cook seems a good choice.
This trick worked well in Russia during the Soviet era and after, nobody ever suspected their policies had so a Rasputin spirit. Since the latest change of regime, they even added some humor when choosing the new puppet, Putin without the "Ras".

So now the question is: how many Apple engineers do you need to boil a cadaver until obtaining its Essential Salts ?

He could have been one of My prefered Lover Nyarly's avatars or puppets, except he wasn't.

He was the purest instance of best and worst product this feeble human race is capable to engender once every several centuries, at the most.
The previous one, was... Napoleon I ? And he wasn't even "working" in the same domain...

Now the problem will be for his company, Apple, to find a proper replacement. All the long of its short history, this company went well when Steve was here, and bad when he wasn't.
And I doubt a Napoleon would be interested in making the world better with pocket electronics.

Finding a genius, gifted evangelist, and complete asshole like this guy won't be possible before one century or two.

See you in the Shoggoths Pits, dude.
Posted by JC at 11:00 PM No comments: